We've waited, we've bided our time, we've gathered data and now we are ready to smite traditional local dev to ruin by unleashing the true power of Lando

About midway through 2018 we reached a few of the milestones we were looking for:

While the amount of monthly active users and support requests were very surprising (and encouraging) to us the other two were not because SPOILER ALERT: our beta releases were essentially proof of concepts; prototypes hacked together to demonstrate whether people actually wanted something like Lando or not. Our conclusion from this data was that not only do the people want something like Lando but they crave it.

Since then we've been listening to users and heeding their advice as we try to lock down the core set of Lando's functionality and figure out what we needed to do to take Lando to the next level. This has been a very enlightening process, aided by the lessons learned during the Kalabox project and culminating in this release.

At time of writing Lando has peaked very close to 9,000 monthly active users and has averaged around 8,000 for the last quarter or so. 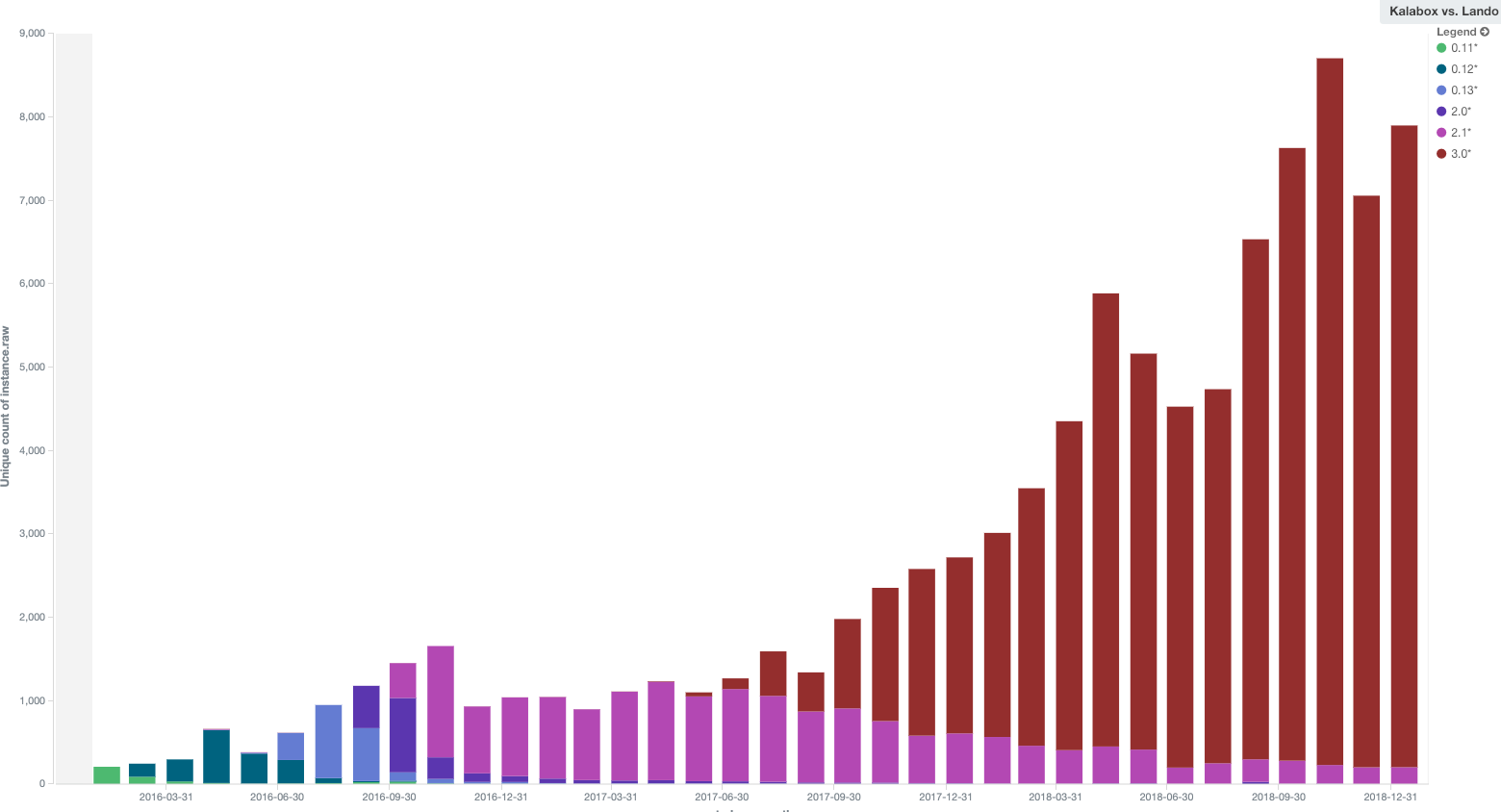 We never dreamed we'd have this many users before a stable release and have been working very hard to cut a release that lays the foundation for more growth and adoption in the future.

Speaking of new foundations we'd like to tell you all what we've done to prep Lando for a stable release and beyond...

Hitherto, and as mentioned above, Lando has been essentially a prototype. We've been haphazardly pushing up new code while leaving no thought for the morrow as we try to confirm the features users need to be successful developing their projects. That process, while important and illuminating, resulted in a massive amount of techincal debt.

Lando RC2 is in many ways a bottom-up rewrite to address this problem; to consolidate code around an emergent set of community-agreed-upon features.

But you don't have to take my word for it. Here is a Code Climate analysis of technical debt over the last 6 months. 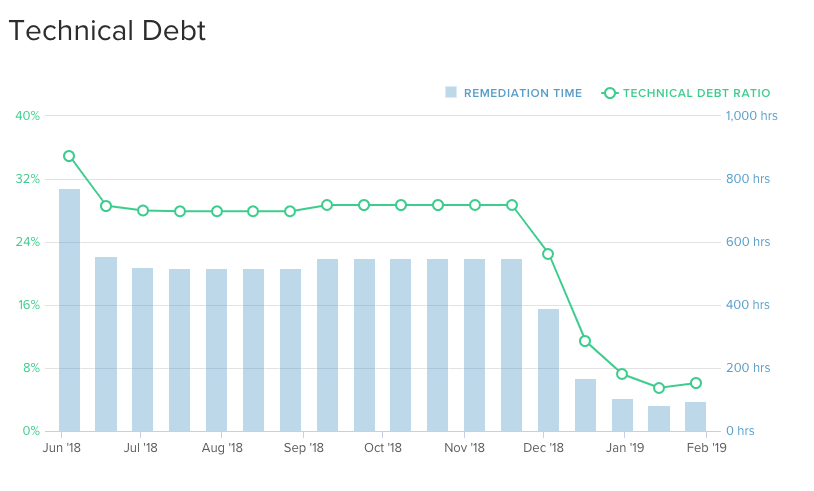 The check always comes due

Believe it or not the technical debt ratio at the beginning of 2018 was actually around 60%!.

While this reduction has been much needed we've implemented CI tests to make sure no new code introduced into Lando increases its technical debt beyond an unacceptable threshold.

# Locking Down the API

Refactoring the code to reduce technical debt and getting a better sense of the core features means we can now also provide better docs and API stability. To that end you can now read our lips when we say no new breaking changes.

This means that RC2, while still not a stable release, will not be changing its core syntax and will guarantee backwards compatibility here on out.

Unlike the late George H.W. Bush we want to fight for the users and win that second term.

You can take the following docs to the bank.

We've put in a ton of effort to document and test the above so there is a considerable amount of inertia required to substantially change any of them. This means that you can count on our laziness for future stability.

To that end we've implemented both unit and functional tests.

We don't have 100% coverage yet but we are covering the most important things. 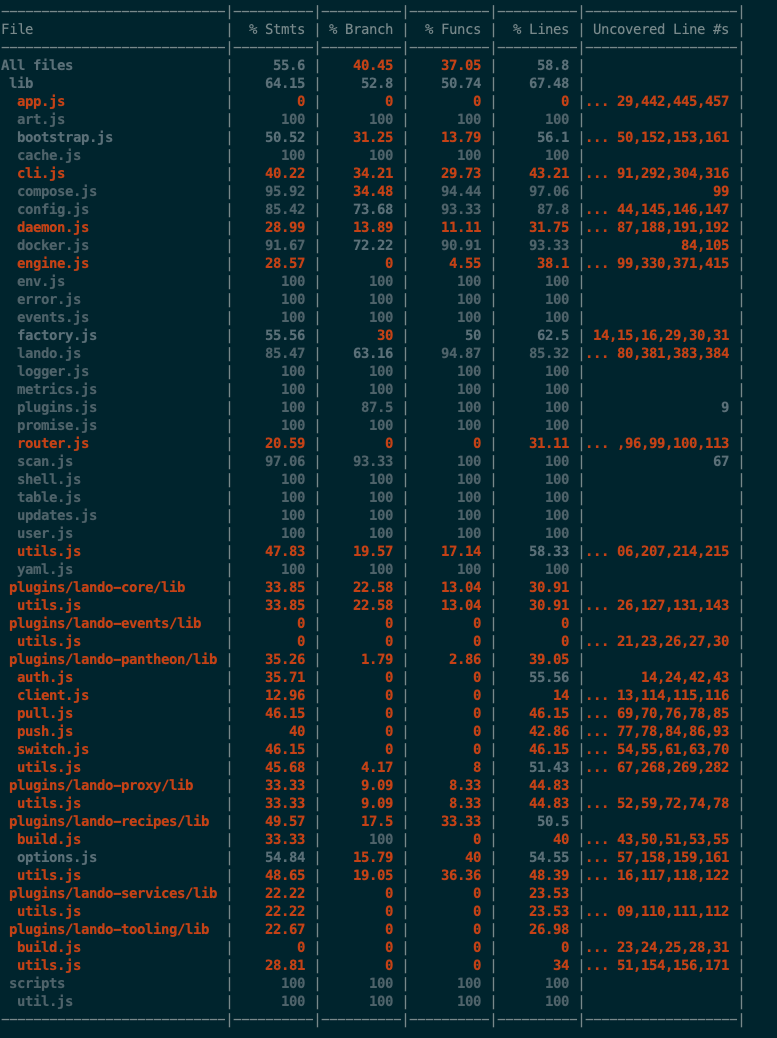 Here is a sample screenshot of one part of one test we run on one of the 10 concurrent CircleCI machines that run on every build. 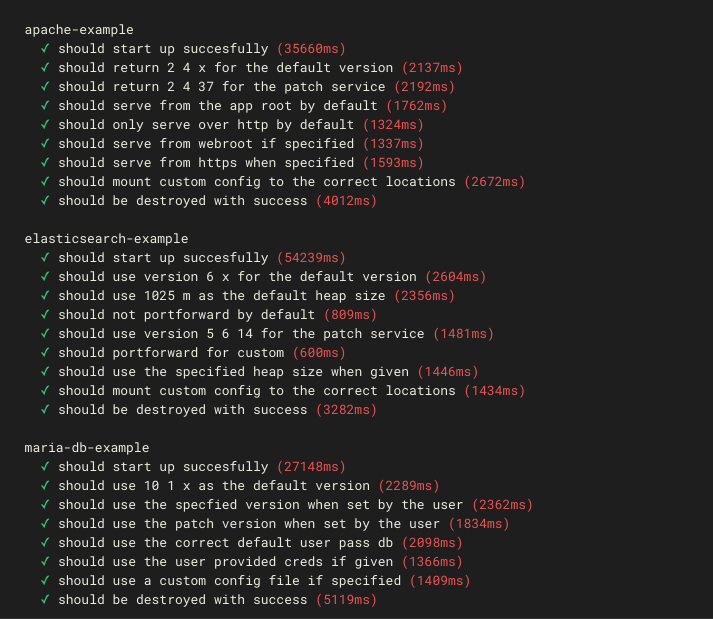 This allows us to test all of the things in Lando's examples directory and by extension most of the code in our documentation.

This means that you should be able to git clone the examples folder and succesfully run any of them. If you are interested in checking what these tests look like on CircleCI you can go here.

# So what did we change?

While a consequence of RC2 has been some annoying breaking changes we've prepared an update guide to help you update your Landofiles.

Breaking changes aside, here are all the awesome improvements in RC2.

We've rebased a lot of our images on Bitnami's because they are more "local dev" ready. This has provided a bunch of extra stability.

A downside of this is that some supported Lando versions have gone away.

Install a php extension and then composer install

Tooling is more powerful than ever.

One of the most common uses of tooling is to emulate native commands like php, composer or yarn.

The above will run php inside of the appserver and also pass in any additional args or options you specify. That means that you can run lando php in the exact same way as php. This greatly reduces the hassle involved in invoking said commands directly with docker, docker-compose or even lando ssh. See below:

You may also wish to consolidate a complex command into a simpler one. This is useful because it can help prevent human error and reduce documentation.

cmd can also be an array. This allows you to chain an indefinite amount of commands together.

Note that each line of the above runs in a separate subshell so if you source a file in the first command like we unwisely did above it's not going to be available in any of the others. If you need that sort of behavior consider something like this instead

You can also omit the service and define cmd as an array of objects where the key is the service and the value is the command. This can allow you to consolidate complex testing and build steps that need to happen across many different services.

It also allows you to reuse a common interface across many different Landofiles, eg lando test may differ from project to project but it's always what we use to run our tests.

Sometimes you have, need, or want a single command that can be used on a user-specified service. In these situations you can tell Lando to set the service with an option.

Note that the : prefix is what tells Lando to use an option instead of a literal string. Also note that you should be careful to avoid collisions between options you specify and options the underlying command does.

You can also define your own options for use in tooling. These options follow the same spec as Lando tasks and are generally used in combination with an underlying script.

Note that the options interface just provides a way to define and then inject options into a given command. It is up to the user to make sure the underlying command or script knows what to do with such options. Note that if you use interactive options you need to set level: app as below.

You can now use pre and post Landofiles to set base and overrides configurations. You can do the following things:

If you are developing a project start state or have a set of Lando configurations you'd like to ship with all your projects you can use a "base" file with defaults that can then be overriden by your usual .lando.yml. By default Lando will detect any of the following files automatically and load them before your .lando.yml

On the flip side you might have some user-specific configuration you'd like to use on only your computer. For these situations Lando similarly offers an "override" file that will be loaded AFTER all base files and your .lando.yml. Generally you will want to .gitignore this file.

If you change your Landofiles you now need to explicitly run lando rebuild instead of running lando restart. This helps to provide stability between restarts until you explicitly ask for things to change and vastly speeds up stops and starts.

We've completely reworked lando init to be more modular and intuitive. This means if you've got scripts relying on lando init you will likely need to make some changes. While there are many changes the biggest are the removal of the "init method" in favor of the --source option.

There is no longer a register of apps stored at ~/.lando/cache/registry. As a consequence you can no longer do things like lando start MYAPP

You now have to explicitly set the top level env_file if you want to load a env file.

Had a .env file in Lando root directory

We've vastly simplified our Drush handling. You can now only set drush to a particular version for global installation. If you've installed drush via composer then Lando will use that version instead of the one in your Landofile.

Lando no longer uses -- to differentiate between its options and tooling options.

If you have written your own custom plugins

We've finally locked down a Plugin System that uses the Lando and App APIs and while we still don't have a great way to manage the installation and management of these plugins, it is going to be the defining feature of 3.1.0.

Here is the complete list of changes in RC2.